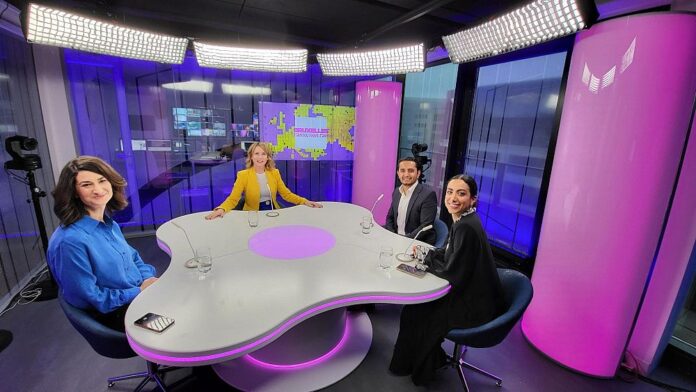 The Euronews Brussels bureau brings you its fifth episode of a new talk show that aims to break down European news and politics to make it more accessible to viewers.

Watch the video above to see our newest Euronews talk show Brussels, my love?

The show dealt with the topic of women in boardrooms following a vote in the European Parliament requiring all publicly listed companies in the bloc to increase the presence of women on boards.

The EU directive aims for the “under-represented sex” — ie women — to occupy at least 40% of non-executive director posts in large companies by 2026 through the introduction of more transparent recruitment procedures.

The directive is the brainchild of former EU Commissioner for equality Viviane Reding. Negotiations took more than a decade and concluded thanks to recent pushes by the French and German governments.

Trees Paelinck, the head of Women in Board Belgium, told the panel via Zoom that the directive would be good news for the economy as research shows that companies with a diverse gender board perform better.

Companies with gender-diverse boards are role models for inclusivity, show respect for the equality of talents and put more attention on sustainability and climate issues, she said.

Panellists also spoke about the recent images of violence and vandalism after a Belgium-Morocco football game recently.

“What saddens me is from a narrative perspective, I feel these kinds of images always go viral when it concerns African, Arab communities in Europe,” said Soundous Boualam, co-founder of the Brussels Global Review.

“But a few weeks back when there were riots in France caused by German football fans after a match, a football game between Cologne and Nice, the images didn’t go as viral and people didn’t focus as much on these, which shows the bias present in Europe towards Muslim, Moroccan, African communities,” she said.

Lara Volters said it was just a small group of people that are ruining it for all of those who are enjoying that match.

“I do think that there’s a general problem with football hooliganism and that hooliganism in my country, the Netherlands, is very much present. It’s absolutely not a problem of a particular community. It’s widespread and it’s unacceptable,” she said.

Ahmad Wali said he believes the issue is one of ‘frustration’, that people from different ethnic groups feel sidelined or as being deprived of something and trying to have the opportunity to show that that they exist.”

He has been researching the topic for many years and says there is a lot of evidence showing the segregation of certain minority communities.

“We have to really fundamentally look at this and tackle the problem,” he says.

Boualam added that all over Europe, there is a problem of segregation of these communities that sometimes results in violence.

“We need to ask ourselves, why are these young people feeling so isolated that they need to (express) that through violence?

“They live in environments where they are secluded, there’s bad transport in those areas. They don’t have much going on. So of course they will explode at some point.”

Watch the full talk show in the video player above.