HomeNewsEuropeWhy Lithuania is polarised over Russia's war in Ukraine
NewsEurope

Why Lithuania is polarised over Russia’s war in Ukraine 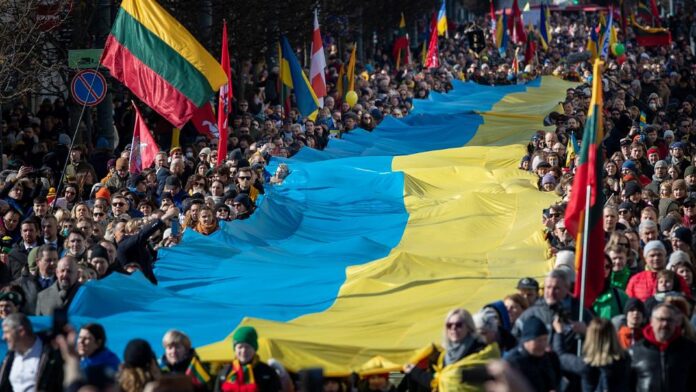 Russia’s military invasion of Ukraine has drawn fierce condemnation from across Europe.

But not in all quarters.

In many countries neighbouring Russia, especially those that once formed part of the USSR, a small minority of mostly Russian speakers have come out in support of the invasion and defended Putin’s aims.

One example is the small Baltic state of Lithuania, which borders the Russian enclave of Kaliningrad.

Up to 15% of Lithuania’s population are Russian speakers, according to Lithuania’s Research Council, and Russians make up the second-largest national community in Lithuania.

Sasha Danilkova, 25, who was born and raised in Lithuania, only speaks Russian.

While Danilkova describes herself as Lithuanian, half of her family are Russian speakers descended from Russians and Ukrainians.

“I am completely against the war. It is madness,” she said. “Putin and the people around him have gone crazy.”

Yet, Danilkova’s view of the war is in stark contrast to that of her parents and extended family, especially its older members.

“They say, yes, it is sad people will die,” she said. “But some of my family think the war was needed and that Putin is correct.”

What she found “the weirdest part” was that such support was aired most vocally by the Ukrainian side of her family, who have relatives in the country.

Although the views of Lithuania’s Russian-speaking minority toward the war have not been surveyed, other polls are indicative.

In one European Values Study conducted in Lithuania, 54% of those whose first language was Russian agreed with the statement — pushed by Moscow — that Russia’s policies are an adequate response to US and NATO actions directed against it.

A further 48 per cent said they thought Crimea, which Moscow annexed from Ukraine in 2014, lawfully belonged to Russia.

‘The situation is far from rosy’

Danilkova claimed age was behind her family’s pro-Putin sympathies.

“Older generations of Lithuanians are closer to Russian people,” she said. “They only consume Russian news and mostly talk to other Russian speakers.

“They don’t hear other points of view,” Danilkova added.

Irrespective of their source, the views of Lithuania’s Russian speakers are impacting society.

Dr Margarita Šešelgytė, director of international relations and political science at Vilnius University, said they were creating “under the surface tensions”.

She said many of the Russian-speaking community are concerned about government-led initiatives to rename the Russian Drama Theatre of Lithuania in Vilnius, due to the Ukraine war, as well as dismantling Soviet statues.

Russian speakers are also increasingly viewed by Lithuanians with suspicion, according to Šešelgytė.

“There are certain prevailing stereotypes that cause a lack of trust,” she said, citing how Russian speakers’ intentions to join the Lithuanian army had been met with suspicion and hostility in public debates.

‘It never caused problems in the past’

Still, the influence of Russia is not only related to age.

According to Šešelgytė, support for Russia and Putin is “quite high” in Lithuanian’s Russian-speaking schools.

She pointed to the fact that many teachers inside the schools were Russian, alongside the use of the Russian language which “helps construct an identity of who they are”.

“The schools are places where Russian propaganda and disinformation still reaches the younger segment of the society,”  Šešelgytė said.

“It is a challenge we have to think about.”

There are currently 48 Russian schools in Lithuania, teaching some 14,000 pupils each year.

In an effort to curtail Russia’s influence, Lithuania banned Russian and Belarussian TV channels in 2022 and blocked many Russian news outlets online.

However, Šešelgytė said the situation in Lithuania was “not as bad as in other Baltic states”, where there are large Russian-speaking minorities.

One reason, she claims, is that Lithuania’s Russian speakers are well integrated.

“They participate in civil service, study at the same university, go to the same restaurants, the same bars … which is not the case in other Baltic countries where there is more segregation,” she said.

Russian speakers in Latvia and Estonia, where they account for approximately 25 per cent of the population, have long faced political and social difficulties since their independence from the USSR in 1991.

A significant number have still not attained citizenship, meaning they are unable to vote or hold office nationally or in the European parliament.

‘The war does not allow a grey zone’

Šešelgytė said things for Lithuania’s Russian-speaking minority were “getting better” as the generations changed, despite the problems surrounding the war.

Lithuania is one of the most active and vocal global supporters of Ukraine.

Some 50% of Lithuanians have donated money or found other ways of helping Ukraine, according to a Baltic News Service Poll.

This general climate, said Šešelgytė, was pushing Russian-speaking Lithuanians to disagree with the war.

“In the war, there is no place for the grey zone,” she said. “It is either white or black and you have to take one side.”

These efforts have also been supported by an effective government message that has distanced Lithuania’s Russian speakers from the conflict beyond their borders.

“What we have succeeded in doing is pushing a message that the war is caused by the Russian regime and that are Russian speakers are safe,” she said. “This is not a witch hunt.

“We have to stay united,” she added.