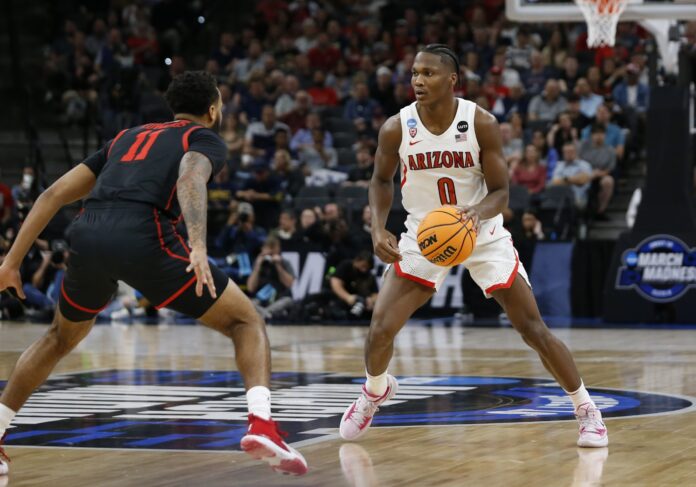 It’s about that time of the year. In just a few hours, hoopers from all across the country will soon turn their dreams intro a reality at the 2022 NBA draft. This year’s daft class is stacked with big names, NCAA champions and even a SLAM cover star.

Leading up to tonight’s festivities, we’re taking a look at the cant-miss prospects you should have on your radar. Let’s get it.

A native of Montreal, Quebec, Bennedict Mathurin leads the next generation of Canadian hoopers.

A true shot-maker with the ability to score in the catch-and-shoot or off the dribble, Mathurin should be able to provide instant offense for a team at the next level. He scored 17.7 points per game on 45.0 percent shooting from the field, and 36.9 percent shooting from three and displayed the capability to take a game over at Arizona (look no further than his career-high 30 points against TCU in the second round of the NCCA Tournament).

In addition to his shooting prowess, Mathurin has a powerful first step when attacking the rim and has shown the physicality to destroy rims.

His efficiency as a long-range shooter is something teams across the League love. During his freshman season, Mathurin hit 41.8 percent of his three-point attempts as a spot-up shooter. When asked to do more during his sophomore campaign, Mathurin improved his accuracy despite jumping up to 6.1 shots per game (while also managing ball-handling and playmaking duties).

Mathurin also has an excellent in-between game and is reliable at the free-throw line, 78.9 percent as a sophomore. His maturation from a spot-up shooter to a dynamic three-level scorer makes him one of the most dangerous prospects in the draft. He’s also a willing rebounder with good size and strength, pulling down 5.6 boards per game last season.

The 2021-22 PAC-12 Player of the Year and consensus second-team All-American has earned comparisons to the likes of Jamal Crawford and Victor Oladipo with his length and ability to score off the dribble and in catch and shoot sets.

A product of the NBA Academy Latin America, Mathurin’s refined offensive game makes him a flat-out baller and a player who should be a productive scorer for years to come.

Improvement was the key to Keegan Murray’s college career at Iowa. Nearly every major statistical category of Murray’s game improved from year one to year two. His rebounding improved by over 3.5 boards per game; he transformed into a knockdown outside shooter, dished one more assist per game, and saw improved steal and block numbers. The result of this? A projected top-five pick with the tools to be a two-way star.

At 6’8, Murray’s a versatile defender with the length and mobility to guard nearly every position on the court. He averaged two blocks and a steal per game last season and used his leaping ability to contest shots at the rim. The Iowa native isn’t afraid to mix it up with big men on the boards, averaging 8.7 rebounds per game.

On offense, Murray is a scorer who can be productive without the ball in his hands. Between timely cuts to the basket and a robust pick-and-pop game, Murray knows how to contribute without demanding isolation or ball-dominant sets effectively. He’s comfortable in the post and is productive in the paint because of his superb shot selection (a career 54.3 percent from the field).

Murray didn’t shy away from the pressure of being a number one option for the Hawkeyes, recording 23.5 points and 8.7 rebounds per game while shooting 55.4 percent from the field and 39.8 percent from three last season.

After averaging just 7.2 points per game as a freshman, Murray was a consensus first-team All-American, first-team All-Big Ten, and Big Ten Tournament MVP as a sophomore. He was also the winner of the Karl Malone Award, given annually to the nation’s top power forward.

Murray could be considered a strong wing player or even a small-ball center in the League. His versatility presents mismatch nightmares for opposing teams. The ability to serve as a solid defensive presence while scoring from all three levels on offense is a rare trait. A late bloomer who was unranked in high school, Murray’s enormous improvements and potential as a do-it-all contributor on both sides of the floor make him one of the most intriguing prospects of the 2022 draft class.

An Australian guard with elite defense and passing? We know what you’re thinking. No, Dyson Daniels is not a Ben Simmons replica, but he certainly shares a similar skill set as the 2016 No. 1 overall pick.

Daniels is a crafty playmaker and high-IQ defender who played in the NBL1 and NBA Global Academy in Australia before joining the G League Ignite in 2021. In the G League, he displayed his skill as a reliable ball-handler and master in the pick-and-roll with the ability to hit the open man or make defenders pay with his patented floater, a move that’s become a go-to option for the 19-year-old.

Daniels averaged 11.3 points, 6.2 rebounds, and 4.4 assists per game when matching up against NBA-caliber talent last season. The 2018 FIBA Oceania U15 Gold Medalist emerged as a two-way threat with his 6-10 wingspan and solid frame. Excellent court vision and ability to be a disruptor on defense allowed Daniels to set himself apart from the rest as this year’s top G-League prospect.

Speaking of defense, Daniels recorded 1.9 steals in 2021-22 while showcasing the ability to lock up both traditional guards and larger wing players. His high basketball IQ serves him well on this end, as he knows when to switch and send help, but his one-on-one defense is what could make him a bag in the League. He sticks to his matchup, and because of his active hands and ability to slide his feet, he can be trusted on an island to put the clamps on.

The Australian only averaged 2.1 fouls per game last season, so he knows how to play defense without fouling. Daniels is also the first to dive on a loose ball and set the tone of the game, an invaluable asset not always shown on the stat sheet. Because of that mindset, Daniels contributed in ways you don’t see in the box score with his instincts, feel for the game, and hustle.

On offense, Daniels will have to boost his three-point shot (he shot 25.5 from three last season) to become an all-around threat, but he has the potential to turn into a spot-up shooter with his already much-improved jumper. He could potentially contribute immediately as a perimeter defender and facilitator as the two-way prospect teams desire in a top pick.

No prospect has improved over his four years in college more than Ochai Agbaji. He went from bench piece to regular starter to star player and has progressed at every point to find himself as a potentially coveted piece for an NBA team.

It starts with his physical tools: Agbaji possesses a 6’10 wingspan and a 6’6 frame, making him an ideal wing defender for today’s NBA. Agbaji’s advanced defensive metrics suggest he is a wildly optimistic defender, something many NBA teams will find valuable. In his four years at Kansas, Agbaji hasn’t had a defensive plus/minus of less than 2.2. His vertical was measured at 39 inches at the combine, which will also serve him well in cutting situations and rebounding.

Agbaji’s three-point shot has also steadily improved over his time in college, as he shot over 40% this past year, delivering several clutch moments throughout the college year. His most important moment was shooting 6/7 from three in the Final Four matchups against Villanova. He also went 7/12 from the field against Texas Tech at home and was a key performer in the Big 12 tournament championship going 3/6 from downtown, finishing with 16 points and seven boards.

When asked about staying for a fourth year in college, Agbaji opened up about his thought process.

“Sometimes you’ve gotta stay patient; sometimes it’s not going to be there right away, the first two years or first three years. But if you stay the course, things will come to fruition,” Agbaji said.

It seems as if staying one more year at Kansas helped his draft stock after testing the waters last year, which resulted in a consensus All-American year with a Big 12 & National championship at a blue blood program under an all-time great coach in Bill Self. The stars have aligned for him as the ideal “Three and D” prototype that teams demand after four years of steady improvement and being a late bloomer, which has been for the better.

Shaedon Sharpe technically hasn’t played since his senior year of high school, where he was the number one ranked player in the 2022 class until he reclassified to the 2021 class. Sharpe sat out the entire 2021-2022 college season, choosing to develop on-campus without playing a game; however, that hasn’t seemed to hurt his draft stock in any capacity.

“My thought process as an athlete, as a basketball player, was really just getting better,” Sharpe said per Sporting News. “So I was just in the gym every day, working out. Really for me, whatever happened, I’d be ready for it.

“Like I said before, everything happens for a reason. So I really don’t regret [not] playing,” Sharpe said. “I mean, I’m working with NBA teams now. So I guess I did something right.”

According to Eric Bossi, the National Basketball Director of 247sports, “Sharpe is an explosive athlete with a nose for the rim.” Bossi also said Sharpe had developed his handle “tremendously,” which has allowed him to become a creative scorer and playmaker.

According to Bossi, Sharpe also has an “electric first step and his ability to get downhill, into the lane, and then finish around the rim.” Bossi also likes Sharpe’s length and ability to move well laterally and believes he “has all of the tools to develop into a player who is just as disruptive on the defensive end of the floor as he is on offense.”

Like Agbaji, his physical tools allow him to be a coveted prototype NBA wing that plays defense and can score at all three levels. His explosive athleticism will keep him a step ahead of everyone else in the League, much of that credit going to his above-average first step. If he can just control the ball-handling a little bit more and prove to be healthy, he could be THE steal of the draft.