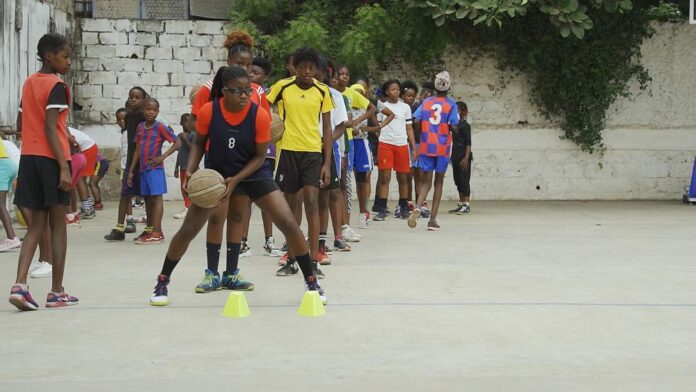 Hard-working like the ants they’re named after, Angola’s Formigas do Cazenga are a basketball team and school preparing inner-city kids in Luanda for a better life. One of their star players, Sara Caetano, has gone on to the Tony Parker Adéquat Academy in Lyon, France. Parker, a veteran NBA star, says he aims to find more players like Sara in Angola and beyond.

Transforming the dreams of a community

The “Formigas do Cazenga” sports school has been transforming the dreams of a community in Luanda for 20 years. It’s a dream from humble beginnings, with a lot of hard work and determination.

That’s why they’re called the Formigas “the ants” of Cazenga. Coach Eduardo Fonseca founded the basketball club 20 years ago.

“It is due to how ants organise – the workforce, the will, humility and how they never stop working, are always focused, even the younger ones,” he says.

Over those two decades, the Formigas, based in Luanda’s most densely populated municipality, Cazenga, have taken in thousands of Angolan kids to teach them basketball, and much more.

“It has to do, first, with education,” says Cazenga. “It is to create, give moral, ethical, cultural values ​​to our young people and learn to educate, respect and be organised and be persistent in life.”

One of the Formigas’ star players is Sara Caetano.

“From the beginning, when I started, they showed that they are not just coaches or colleagues, they show that they are parents, and that I have sisters here that I can count on,” she says.

You can count on help and hard work here: key qualities of the Formigas, on-court and off.

And there’s help from a veteran Franco-American basketball star, Tony Parker. He led the San Antonio Spurs to win four NBA championships in the US. Sara is one of his students at his basketball academy in Lyon, France.

Born in Belgium to an American basketball player and a Dutch mother, Parker became a French citizen and a star player on the French national team. Now retired, he supports a number of charities, including his academy.

“My basketball evolved when I got here, collectively and tactically,” says Sara. “My dream really is to become a manager, I’m studying for that. I’m studying here at the academy. It’s been really good, the people here are amazing, they’ve helped me a lot and they give me that support to make my dream come true”.

Plans for the future

Tony looks forward to more players like Sara coming from Angola, and elsewhere.

“My plan is to go in Angola,” he says. “We started with Sara because she had the potential to do something with the basketball team that we are helping over there. I definitely want to go over there and visit them and try to find more kids like Sara”.

Back at the Formigas club, Sara gives her teammates a reason to dream.

“For the next generation, my message is to keep working and believing in your dreams, that anything is possible,” she says.

The sports aspirations of young Angolans are now taking a new direction with the help of the stars.

Powering up wind energy in a world of climate variability