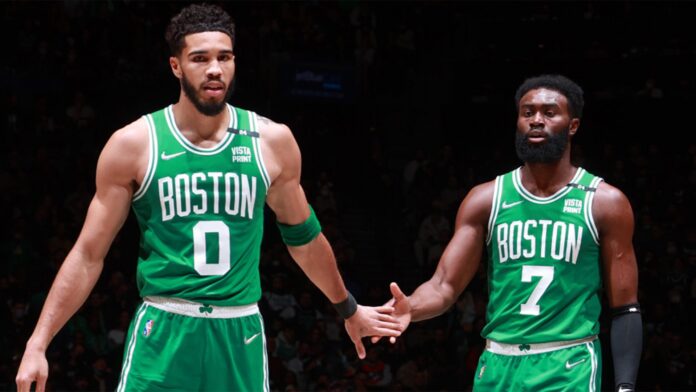 Although the Mavs are playing the Celtics tonight at TD Garden in what will be a huge matchup, Luka Doncic wasn’t shy about giving his opponents some props, in particular Jayson Tatum and Jaylen Brown.

“They’re probably the No. 1 team in the league, and they probably have the best duo in the league, too,” Doncic said. “And we’re in the Garden – it’s always a special game. You have to come 100 percent. If you’re not, you’re probably going to lose. It’s a big game.”

Doncic isn’t wrong. Tatum and Brown are the league’s highest-scoring duo, as they average a combined 55.5 points per game, more than Philly duo Joel Embiid and Tyrese Maxey (55.2).

pulled out the euro pic.twitter.com/3mFfjZgZy4

“Just watching their game,” Doncic said. “I think a lot of people can see that. I think the way they play. I know people try to separate them but they fit together, they went to the Finals last year, so I think those two are really great players.”

The dream team may not be in full force tonight though as Tatum is listed as questionable due to a left ankle sprain.

The Celtics will be even harder to beat than usual since their last game was a loss to Chicago on Monday, just their fourth loss this season. Despite this, they still enter Wednesday night’s game with the league’s best record (13-4), which includes a 6-1 record on their home court.

From what we’ve seen from Doncic so far this season, he will be up for the challenge. He comes into the game as the league’s leading scorer at 33.5 points per game and is averaging 9.1 rebounds, 8.1 assists and 1.9 steals.

The Mavs will also be likely to welcome back point guard Spencer Dinwiddle (following a shoulder injury), which will give Doncic some much-needed support.