HomeSportsEye on the future: the Vienna Philharmonic Orchestra Academy
Sports

Eye on the future: the Vienna Philharmonic Orchestra Academy 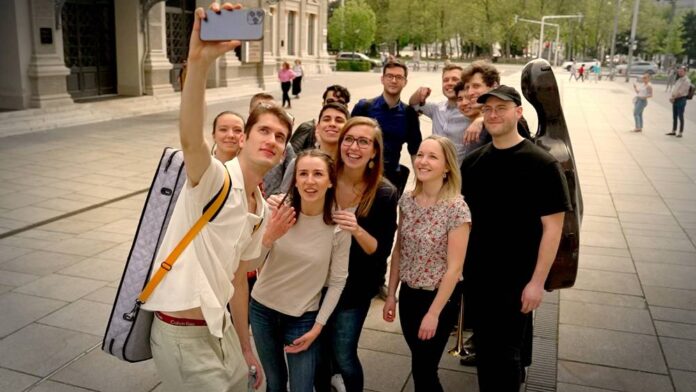 To play in the Vienna Philharmonic is one of the ultimate symbols of achievement for a musician. Its traditions and unique playing style are renowned, but this world-famous orchestra also knows it needs to nurture the next generation of musical talent if it’s to keep thriving in the future.

It’s the reason why in 2018, for the first time in its history, the orchestra set up The Vienna Philharmonic Orchestra Academy. But what is it like to be a student at this prestigious finishing school for classical musicians? Musica went to the Austrian capital to meet some of them and find out.

The Vienna Philharmonic founded its very own music academy with the principle aim of spotting and fostering a new generation of stars for its orchestra.

Drawing up an exclusive and versatile two-year programme, the academy took on around a dozen students, including Lucas Stratmann from New York.

“We all practise on our own by ourselves for hours a day. But we have this opportunity to come together and create this music together which is really wonderful.”

Petra Liedauer, another one of the academy’s intake said: “I still remember very well the first rehearsal, I was very close to tears because I couldn’t believe what I was experiencing.”

One of the key objectives behind the programme is for the students to absorb the orchestra’s traditions and legendary style of play.

“The most important thing is playing in the orchestra, because that’s where things are passed on and handed down,” explains Michael Bladerer, the Vienna Philharmonic Orchestra Academy’s founder.

“The lessons every week from a colleague are of course also very, very important. Chamber music is essential, when there is no conductor in front of you, because you suddenly realise when you have to take on responsibility, when you need to hand it over and when you have to listen to each other,” Bladerer adds.

During their time at the academy, the students also get individual coaching from some of the Vienna Philharmonic’s most experienced performers.

“I think it’s our responsibility to be able to communicate with them what we have learnt in the past, not only through playing with them in the orchestra but also being able to give them tips and help them be able to become independent musicians themselves,” explained Vienna Philharmonic First Violinist Benjamin Morrison.

Stratmann agrees, insisting this individual training approach together with playing in the orchestra has been crucial in making him a better classical musician.

“I’ve been able to learn so much just about, you know, the technical aspects of playing, but also more imaginative thinking in my playing as well. It’s just this incredible depth of knowledge that we are able to receive in these lessons,” he said.

At the heart of it all: achieving excellence.

As the orchestra looks towards the future and champions contemporary music the students also have the unique chance to perform with some of the most accomplished composers of their generation, such as British maestro Tomas Adès.

“It’s always very exciting to have the pleasure of playing in a big orchestra like this for the first time, or one of the first times in their life. And I feel like the younger players now, we might be watching them playing, you know, in many years to come. So that’s a very wonderful feeling,” says Adès.

Nevertheless, the students need many qualities if they are to succeed. For Bladerer the most important trait they must possess is the commitment to excellence.

“Excellence is right at the top. Of course, tradition is an essential value, elegance plays a certain role but excellence is essential. In the end, everything you do has to be at the highest level.”

Lucas Stratmann is part of an upcoming generation of classical musicians with high hopes, but becoming a professional musician isn’t the easiest career choice.

“The classical music world is very competitive and it’s easy to get caught up in that,” he says.

“I had some doubts, probably around the age of 14 or 15. Will I be able to really make a career out of this? Will I be able to perform? What will I be doing with music? And I mean, I love music. And being here has reassured me that I can have a career in music, which is an incredible feeling,” insists the American.

But what does it feel like to be part of such an elite school?

“…not only has this been such an enriching musical experience for me, I’ve also made incredible friends who have brought me up and inspired me so much,” Stratmann adds.

Violinist Robert Amadeo Sanders concurs: “We work together during the day, and then we come together at night and we hang out. And to have this support system, it’s really, it’s really awesome.”

During their time in the academy, the students not only have the chance to experience legendary conductors on stage – for example with world-renowned maestro Christian Thielemann – but they also get to know them personally during so-called ‘meet and greet’ sessions.

Thielemann says one of the most important and hardest things the students will learn is what he describes as homogeneity or the concept of becoming as one.

“Very often they are very straightforward. And because they don’t have the experience, they have a very direct way of going about things. I’m not like that anymore, I’m a bit more hardened and that gets lost a bit. Then sometimes I think, I can see myself in them,” Thielemann says, while laughing.

The students also sometimes take part in historical moments, such as performing a world premiere at the iconic Sagrada Familia or at the Summer Night Concert at Vienna’s Schönbrunn Palace.

Summing up her time at the academy so far, oboe player Katharina Kratochwil says: “My biggest dream would be to win a position in an orchestra, to be able to play the oboe in an orchestra. Of course, it would be the best if it was with the Vienna Philharmonic.”

Having won a position in the Orchestra’s second violin section, Stratmann ends by telling Musica: “Playing in the Vienna Philharmonic is something that I dreamt of even more so once I got here and I saw how much enjoyment everybody has playing in the orchestra and how committed they are to presenting the music and the art in such a beautiful way, and that reinvigorated my passion for music.”