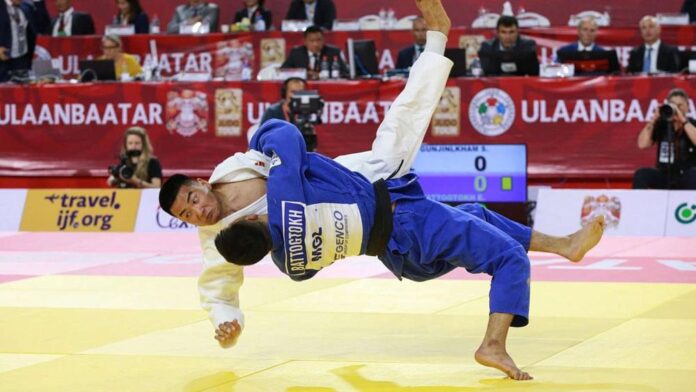 Judo returned to Mongolia as Ulaanbaatar hosted its first ever Grand Slam event. For Day 1 of the Competition, both Mongolia and Japan stand tied with two gold medals each.

IJF Vice-President and EJU President Dr Laszlo Toth was on hand to award the medals.

In the -60kg category, there was more Gold for Japan as Ryuju Nagayama was on fire all day. In the final, he defeated Olympic Silver Medallist Yang Yung Wei with his usual style of attacking Judo.

He was awarded his medals by Director General of the World Martial Arts Masterships Committee Dr Sung-Min Kang.

In the -52kg category, Uzbekistan’s Diyora Keldiyorova executed some brilliant Judo throughout the day, to win her second grand slam Gold, after beating the Russian (in the neutral race under the IJF flag) Alesya Kuznetsova in the final.

She was awarded her medals by Bulgan Province Governor Mr Ariun-Erdene Batbayar.

It was an all Mongolian final in the -66kg category, and both the fighters put on a show for the adoring public. It was Erkhembayar Battogtokh who emerged victorious by beating his fellow countryman Sod-Erdene Gunjinlkham.

The medals were awarded by Chairman of the State Committee for Physical Culture and Sports in Mongolia Mr Jargalsaikhan Dorjsuren.

Battogtokh stated that the future of the sport was at the forefront of his mind: “I am very happy because lots of children start now doing Judo, we are developing Judo in Mongolia, and in the crowd today there were many, many children and it was so great”

There was more delight for Mongolia as the final Gold Medal of the day went to Enkhriilen Lkhagvatogoo, in the women’s -57kg category.

She was awarded the gold medal by IJF EC Member Ms Erdenet-Od Khishigbat.

“It felt like every cheer, every applause gave me a massive energy boost”, stated Lkhagvatogoo. “It was a totally new feeling as it was a grand slam at home, the Ulaanbaatar grand slam!”

With qualifications beginning for the Paris 2024 Olympics, the local team made sure to give the excited fans plenty to cheer for throughout the first day of the Grand Slam. Their unorthodox Judo style, mixed with their strength and agility make Mongolia a nation to keep a close eye on in this new Olympic cycle.