HomeSportsNapheesa Collier Returns to WNBA For the First Time Since Giving Birth...
Sports 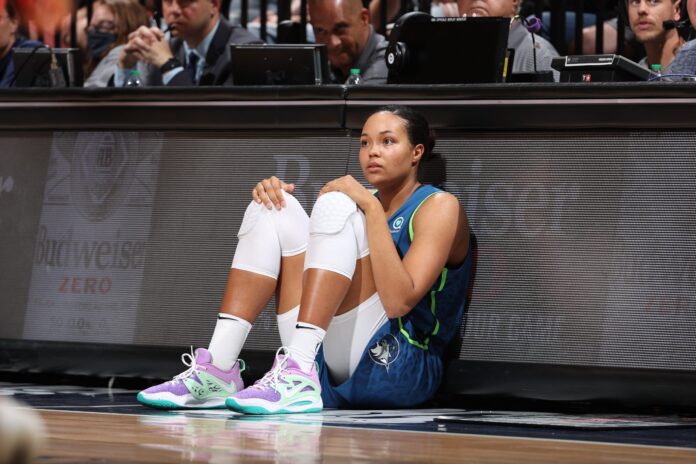 Napheesa Collier made her 2022 season debut on Sunday and helped Minnesota beat the Dream, 81-71, less than three months after giving birth to her daughter, Mila, in May.

The 2019 Rookie of the Year finished the contest with six points, two rebounds, one assist, one steal, and one block in 21 minutes of action. According to Coach and GM Cheryl Reeve, Collier made her return to court after it became clear that Aerial Powers would miss Sunday’s game with a sore knee.

“Her energy, her movement, it just creates easier things for other people, and her length defensively is pretty helpful,” Reeve said per ESPN.

Minnesota Lynx All-WNBA forward Napheesa Collier will return to play in Sunday’s game against the Atlanta Dream, just 10 1/2 weeks after giving birth to her daughter Mila in late May, sources tell @ChantelJennings & @ShamsCharania.

The former UConn’s presence was needed on a night where both the Lynx and Dream are fighting for their playoff lives with three games left in the season. With their victory over Atlanta, the Lynx moved within one game of a playoff spot and are one of six teams that could secure one of the last three remaining spots in the playoffs.

“I’m going to help us make a playoff push,” Collier said. “Every game is do-or-die for us, and I’m going to do everything I can to help that happen.”

Napheesa Collier on helping the #Lynx in the late-season playoff push:

“I’m going to help us make a playoff push. … Every game is do-or-die for us, and I’m going to do everything I can to help that happen.”#Lynx #WNBA

While Collier’s debut may not have produced some gaudy stats, she put together a performance that further validated just how vital her presence will be in Minnesota’s future.

She might not have put up gaudy stats in her first appearance of the summer, but Collier demonstrated much of what she does best: the little things that help her team win. Collier admitted that she felt physically ready to go and that the only thing holding her back on the court was “some nerves.” She also said she felt a little winded during the game after playing twice as long as she initially expected to.

Nonetheless, Collier said her season debut was a “good first game” back.

“I was really excited,” Collier said while holding Mila on her lap postgame. “Obviously, there’s some nerves coming in, especially this late in the season and trying to get back here and rush to do everything. But it felt so good to hear my name called and have the fans cheer for me. It was a really good feeling. So I’m really glad I played tonight.”

. @PHEEsespieces gave birth to Mila on May 25. She made her @minnesotalynx season debut on August 7.

The Lynx have a tough stretch to overcome with games against the Mercury and Sun coming up on Wednesday and Sunday, respectively. Playing against high-level teams like the Mercury and Sun will help Collier get her wind and rhythm back with just three games remaining on the schedule. When she was last healthy, Collier averaged 16.2 points, 6.2 rebounds, 3.2 assists, 1.3 steals, and 1.3 blocks per game.

“She’s got to catch up with the speed of the game and as things are happening, but that’s probably about as successful as I thought it could be, playing probably a bit longer than what we initially thought,” Lynx head coach/general manager Cheryl Reeve said.

“Each time she plays, she’s going to get more comfortable,” Reeve said. “A lot of plays, she doesn’t know. She’s got to get up to speed on everything we’re running. And then we also have to get to where we can feature her.”

Her performance in 2021 garnered a multi-year extension with the Lynx that runs through 2025. Collier recently graced the cover of WSLAM Vol. 2 with Dearica Hamby as WSLAM celebrated the two mothers.

Napheesa and Mila. Doesn’t get cuter than this. @PHEEsespieces