HomeSportsWho Are the Lead Contenders in the ‘Brick for Vic’ Campaign?
Sports

Who Are the Lead Contenders in the ‘Brick for Vic’ Campaign? 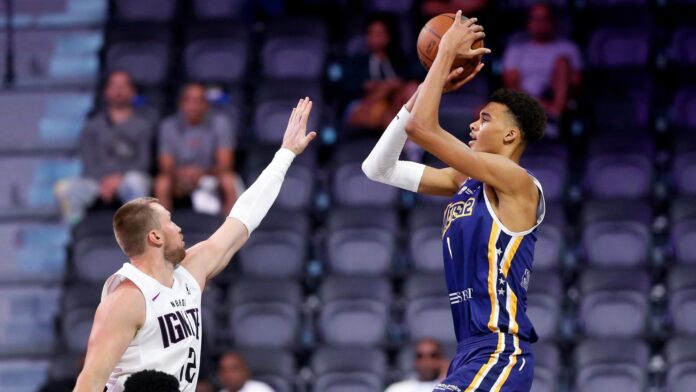 Despite all the excitement of the NBA season, Victor Wembanyama is still very much at the forefront of people’s minds. The opening 20 games of the season have got people talking about this prospect even more because teams that were predicted to go badly are actually doing WELL.

The San Antonio Spurs, Utah Jazz and Oklahoma City Thunder were three teams the bookies predicted to be among the worst but as odds have it, the Spurs are 6-12, Jazz are 12-7 and Thunder are 7-10 to start the season.

Getting the chance to draft Wembanyama is a franchise-changer. This skillful Frenchman is like nothing we have ever seen before. He is seven foot two, which makes perfect sense when you find out his father was a long jumper who is 6ft 6in tall and his mother is a 6ft 3in former basketball player and coach.

His wingspan measures at 8ft, and is naturally a scary shot-blocker and rim protector and good luck stopping him as a perimeter shooter. Many are touting him as the most exciting NBA Draft prospect since LeBron James.

Speaking of, LeBron James himself has called Wembanyama a “generational talent” earlier this year. “Everybody’s been a unicorn over the last few years, well he’s more like an alien,” James said.

Even if a bottom-three team doesn’t get Wembanyama, their consolation prize is hardly consolation at all. Predicted number two pick, Sterling ‘Scoot’ Henderson, has scored at least 25 points four times in the G League this season and even had a season-high 16 assists against the Santa Cruz Warriors.

Last month in an exhibition game against Metropolitans 92 and Wembanyama, Henderson recorded 28 points (11-21 FG, 2-3 3pt), five rebounds and nine assists. If Wembanyama wasn’t in the running, Henderson would definitely be the man everyone is after.

Let’s take a look at some of the current frontrunners to take home the coveted prize (note, these are in no particular order):

The Pistons are 4-15 to start the season and in a huge blow, their rising star Cade Cunningham has been ruled out indefinitely and until Tuesday’s 110-108 win against the Denver Nuggets, they hadn’t been able to record a W without him.

Detroit have the second worst defensive rating in the league, the fourth worst in offense and are the poorest performing team when it comes to shooting.

Their defensive rebounding percentage (72.8) is actually better than most of their other stats. As a reference point, the average Defensive Rebounding Percentage in the NBA is 73%. Their offensive percentage of 25 is just below the league average of 27 percent.

Head coach Dwane Casey is a fiend for experimenting with two bigs in his lineup so Wembanyama could be an ideal fit. He would be one of few Pistons players under 30, besides, Saddiq Bey who could stretch the floor and shoot above the league average.

Without Cunningham it is hard to see Detroit getting away from the bottom three but it is the NBA, so crazier things have happened.

The Pelicans will control the Lakers’ next three first-round draft picks from the Anthony Davis trade that helped them win the 2020 championship and what a year to have that perk.

The Lakers have only managed to string together five wins this season but after losing their first fives games straight, they seem to be on the up thanks to a healthy Davis. Who seems to be a man on a mission. In his last four games he has averaged 35.5 points, a huge 18.25 rebounds and four assists.

With Wembanyama at center and Zion Williamson in his usual power forward position it could be a very unique combination but one that may well prove super successful.

By the end of the season the Rockets and Detroit could go head-to-head for last place. And things may get ugly. Houston aren’t a team that will be tanking on purpose as they are set to rebuild mode after trading Russell Westbrook and James Harden in 2020. Fortunately for them, this comes at a time when they could grab a player that could change everything.

They are trying to do all the right things and have a young core who they are centering around number two 2021 Draft pick, Jalen Green and number three 2022 Draft pick Jabari Smith Jr. need plenty more talent and continued internal development before they can even contend in the West.

Without meaning to, Charlotte could be well on the way to the Draft lottery. They are currently 4-14 and are ranked 30th in the league for their offensive rating (107.1) and their net rating is 27th in the league at -5.6.

On the positive side, they are ranked 12th in the league for assists at 25.3 per game and 18th in the league on their defensive rating (112.7). Also, players like Dennis Smith Jr and Nick Richards weren’t even in the rotation last season and are now are now playing important roles for the Hornets.

In the way of tanking on purpose (which Charlotte may not need to if they continue the way they do), owner Michael Jordan is reportedly not a fan. According to an anonymous Eastern Conference general manager, he doesn’t see MJ changing his mind:

“The hurdle is getting the owner to go along with it,” the GM told Heavy Sports. “It is Michael Jordan. He has never OK’d something like that and it is not clear he would, even if it gets bad this year, even if it puts them in a good spot in the draft for Victor (Wembanyama). He has been pretty strong against tanking. Hard to see another way forward for them now, though.”

Even if they don’t get the MJ approval to officially ‘tank’, we may soon see a hectic combination of LaMelo Ball (if he ever gets that pesky ankle right, of course) and Wembanyama.

The post Who Are the Lead Contenders in the ‘Brick for Vic’ Campaign? appeared first on Basketball Forever.