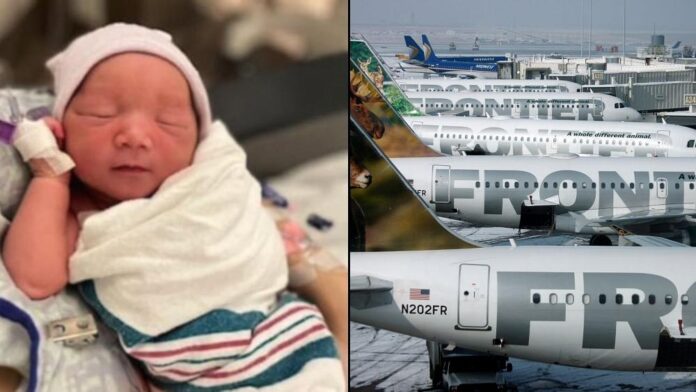 A flight attendant has been praised for “calmly” delivering a baby mid-flight, after US-based Frontier Airlines announced the news last week.

When Diana Giraldo, 35, noticed the mother experiencing contractions on the three-hour night time journey from Colorado to Florida in January she stepped in to help.

27-year-old Shakeria Martin’s waters had broke a few weeks before her due date and Giraldo had to deliver the baby in the plane’s bathroom.

But her exceptional service didn’t stop there. “The biggest concern was when the baby came out, she wasn’t moving,” Giraldo told Orlando TV reporters.

“If she’s not breathing, she must have something in her airways, which I’m assuming is amniotic fluid. I’m not a doctor, I’m not any of that, but I’m assuming that that’s what’s going on, it’s blocking her airways.”

Thinking quickly, Giraldo started to do light chest compressions while she rubbed the newborn’s back, to help stimulate her lungs. The crew also used an oxygen mask on the baby who started breathing just minutes later.

In a sign of appreciation for her safe delivery, Martin called her air-born daughter Jadalyne Sky.

“The whole crew really did a great job,” says Captain Chris Nye. “I transferred controls and flying duties to my First Officer as I coordinated the diversion.

“Dispatch did a great job as well by suggesting Pensacola Airport [in Florida] and getting a gate and paramedics ready for us. This was a job well done, and I was happy to see everyone working together to successfully deliver a newborn on an aircraft!”

Do babies born on flights get any special rights?

Reacting to the heartwarming story, social media users have called Giraldo a “hero” for her speedy and competent response.

There’s also been a lot of interest in the status of baby Jadalyne. “This baby should fly free on Frontier always,” wrote one woman on Facebook. Another suggested she win a spot to be pictured on the tail of the plane.

Both of those calls are up to the airline, with a more cynical Facebook user replying, “They’ll still charge her extra when her bags are over 40lbs [18kg].”

It has also raised questions about the nationality of babies born mid flight.

While baby Jadalyne was born on an internal US flight, other pregnant people have given birth in less certain circumstances.

This potentially cloudy area is covered by the UN’s International Convention on the Reduction of Statelessness. The 1961 text states that “birth on a ship or in an aircraft shall be deemed to have taken place in the territory of the State whose flag the ship flies or in the territory of the State in which the aircraft is registered, as the case may be.”

Countries can still override this however, meaning the baby only gets the same nationality as that of their parents.

It’s a very rare occurrence for a baby to be born mid-flight as most airlines stipulate that pregnant people can’t travel beyond the 36-week mark (or 32 weeks if you are pregnant with more than one baby).

After the end of the 30th week of pregnancy British Airways, for example, also requires a signed letter from a doctor or midwife confirming the estimated due date.

In 1990, a woman gave birth on a BA flight from Ghana to the UK. She named her daughter Shona Kirsty Yves – her initials spelling SKY.

The Ekin-De effect? Flights to Turkey and Italy soar

LGBTQ+ travel: This airline has relaxed its gendered uniform rules

What does the falling pound mean for your next holiday?