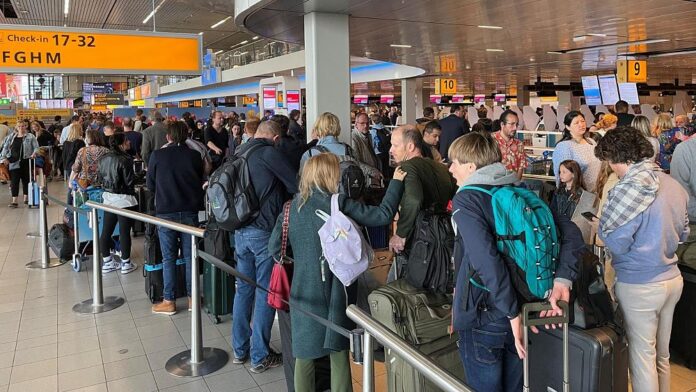 The airport has been the scene of flight disruption over the last month as it has coped with severe staff shortages.

Now trade unions representing staff at the overcrowded airport are threatening labour action on 1 June if their working conditions do not change. They say “something has to change” as both passengers and workers are literally falling over due to exhaustion from the ongoing disruption.

The chaos is not looking like it will improve heading into summer as the airport says the problem will take time to solve. As passenger numbers increase during the busy season, anyone planning to travel is being told that they should expect long waiting times.

What’s going on at Schiphol airport?

Schipol Airport is the second largest in the European Union and has seen severe delays over the last month.

On Monday staff shortages at security checkpoints led to hours-long queues that affected thousands of travellers. More than 500 flights were delayed and over 50 cancelled with travellers taking to social media to complain.

The disruption is expected to continue on Tuesday with more than 100 flights already delayed or cancelled.

The most recent delays come after an unexpected strike led to warnings of “long queues at check-in, security and passport control” earlier this month in the run-up to the May vacation.

The end of this week is Ascension Day in the Netherlands with most people off work on Thursday and Friday. As passenger numbers pick up again during this holiday period, the situation is likely to get worse.

“There was less staff than planned, and it was a very busy day. In the coming period, it will be about as busy as during the May holiday,” a spokesperson from the airport told Dutch newspaper De Telegraaf.

What is causing the delays at Schiphol airport?

On Tuesday morning, some of the problems were being caused by the weather, according to the European traffic control centre, Eurocontrol. It has added to the ongoing problem of considerable staff shortages due to the COVID-19 pandemic.

While passenger numbers are still below what they were in 2019, there are not enough staff to man all of the baggage checkpoints. It has led to queues that stretch into the terminals and beyond.

The most recent delays and cancellations are the latest development in weeks of chaos.

In early May, the Netherlands’ national airline KLM cancelled more than 70 flights from Schipol, while other airlines – including Transavia, Tui and Corendon – rerouted flights to other Dutch airports.

The airport requested the cancellations earlier this month as there weren’t enough staff to carry out vital tasks.

“It is an annoying but necessary measure to reduce the numbers of travellers, in order to manage the crowds in the right direction together with our partners,” a Schiphol spokesperson explained.

Passengers were asked to arrive more than four hours before departure, and the fire department was called in to distribute water bottles to queueing passengers.

Will things improve at Schiphol airport?

Trade union FNV has warned that it will be a ‘hot summer’ unless the airport urgently improves working conditions.

The union has written to the airport’s chief executive Dick Benschop with a list of demands, including job permanency and higher wages.

“Something has to change, we can’t continue like this,” Joost van Doesburg, a spokesman for the FNV labour union told AFP.

“If we don’t have an agreement, we will start with labour action on June 1, including work stoppages.”

As the airport gears up for its busiest season, Mr Benschop has promised that the situation will improve.

“It is clear to us that the summer has to be different,” he said yesterday. “This must not happen again.”

Possible changes could include a flight cap on the number of flights leaving from Schiphol during the busiest periods of the year.

Passengers can check the status of their flight here.

Watch the chaos at Schiphol airport in the video above.

See inside the Australian diner where the customer is always wrong

British Airways staff at Heathrow vote to strike this summer