Flights from Moscow sell out as Russians try to escape conscription 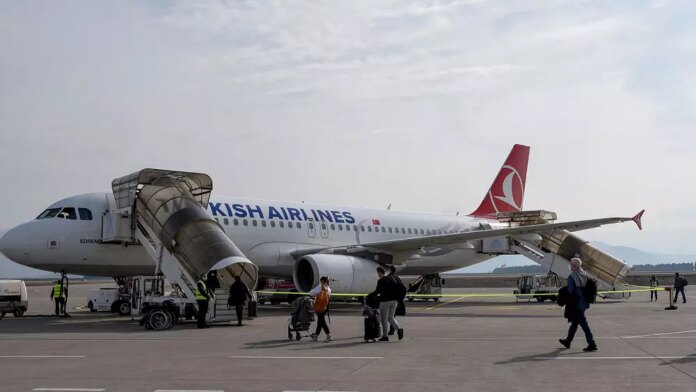 One way flights out of Moscow have nearly sold out after Russia announced plans to call up 300,000 army reservists.

Flights out of Moscow quickly filled up, as possible conscripts scrambled to avoid the draft.

Turkish Airlines don’t have any available seats for a direct flight to Istanbul until Tuesday – and even then the cheapest flight is £2441 (€2800).

At the time of publication, Pegasus, a low-cost Turkish airline, only had one available flight this week at a price of £1,411 (€1,618)

Wednesday flights from Moscow to the capitals of Georgia, Turkey and Armenia — which do not require visas for Russian citizens — were unavailable within minutes of Putin’s announcement, according to Russian travel planning website aviasales.ru.

According to Air Serbia’s website, the first available flight from Moscow to Belgrade is on 9 October, costing around €800 for a one-way ticket.

Only a few airlines still fly into Russia, as the European Union has imposed a flight embargo on the country.

A group based in Serbia, called Russians, Belarussians, Ukrainians and Serbs Together Against War, tweeted that there were no available flights to Belgrade from Russia until mid-October, Reuters reported.

Flights to Turkey, Georgia and Armenia also immediately sold out, according to the Belgrade-based group.

“All the Russians who wanted to go to war already went,” the group said. “No one else wants to go there!”

Who will be called up to flight in Ukraine?

“Military service will apply only to citizens who are currently in the reserve, especially those who have served in the armed forces, have certain military professions and relevant experience,” he said.

Russian-controlled regions in Ukraine have also announced plans to hold ‘referendums’ on whether or not to become part of Russia. Moscow will likely manipulate the results of these contests, White House Security advisor Jake Sullivan said.

Everywhere in Europe that travel strikes are planned in December

Here’s why you should visit Rodrigues