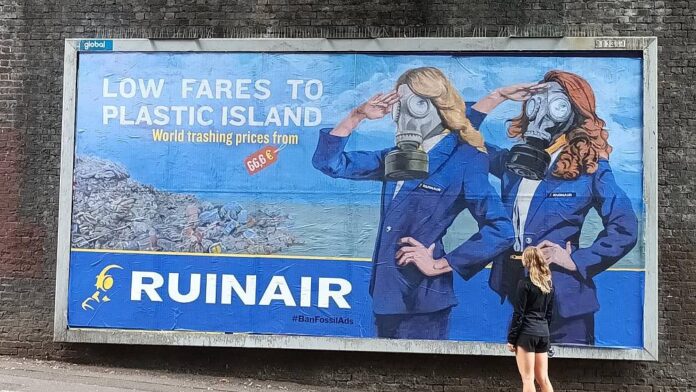 Billboards in 15 European cities have been covered with satirical artwork highlighting the role of airline marketing in driving up greenhouse gas emissions.

Anti-advertising movement Brandalism has installed their work at 500 different sites in Paris, Amsterdam, Brussels, Lisbon, Rome and other European cities.

Airlines referenced in the artwork include KLM, Lufthansa, British Airways, Ryanair, Easyjet, SAS Airlines and Etihad alongside the industry body IATA. All have been contacted for comment.

One of the works by British artist Darren Cullen highlights the “over-sized” carbon footprint of business class flights with the text “We’re turning Business Class green with the world’s first on-board golf course.”

Another by Polish-American artist Michelle Tylicki shows a plane flying over wildfires with the title “Fly Responsibly?”

All of the works aim to draw attention to sustainability claims made by airlines and airports which campaigners say conceal the impact of aviation on the planet.

Global airline advertising could have been responsible for an estimated 34 megatonnes of CO2 emissions in 2019 – the equivalent of burning 17 million tonnes of coal – according to a recent report by Greenpeace.

“The allure and glamour of high carbon lifestyles such as frequent flying has been purposefully crafted by the advertising industry and shows no signs of relenting – despite one of the hottest summers on record,” says Tona Merriman from Brandalism.

Merriman adds that advertising agencies need to consider their role in driving up emissions for the brands that they work for.

“We call on employees in those firms to refuse work for high carbon clients.”

Those behind the satirical ad campaign are also backing calls for a “tobacco-style” ban on fossil fuel advertising and sponsorships.

Calls for a ‘tobacco-style’ ban on fossil fuel adverts

There is growing international momentum for a ban on high-carbon advertisements. It comes as UN secretary general Antonio Guterres blasted the public relations industry at the UN General Assembly in New York this week.

“Just as they did for the tobacco industry decades before, lobbyists and spin doctors have spewed harmful misinformation,” he said.

A recent report from Harvard University found that social media has a big role to play in “greenwashing” the activities of car brands, airlines and fossil fuel companies.

Some cities, like Amsterdam and Sydney, have already got rid of fossil fuel adverts in public spaces. Now campaigners from 40 different organisations are asking for legislation to put an end to high-carbon marketing.

“Advertising for airlines and airports is driving up demand for flights and trashing the climate,” says Robbie Gillet from Adfree Cities, one of the 40 organisations backing the call.

“We urgently need to see the creation of viable, sustainable transport alternatives to flying that ensures job security for workers currently employed in aviation.

“In the meantime, a simple step that government, both local and national, can take is to prohibit advertising for polluting products – for the benefit of peoples’ health, air quality and the climate.”