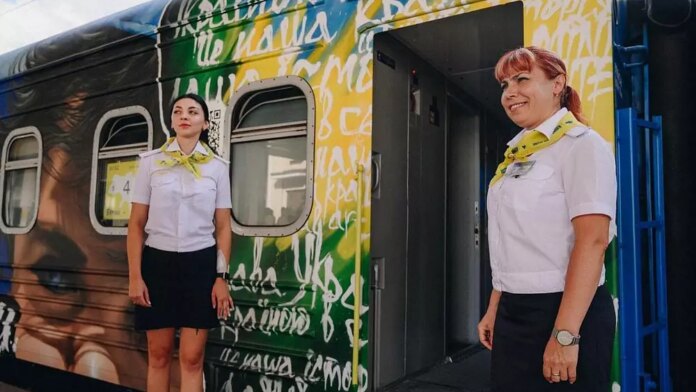 It has now been just over six months since Russia invaded Ukraine.

In an effort to celebrate rail workers who have helped evacuate millions to safety, Ukrainian Railways has teamed up with some of the country’s best artists to create the ‘Train to Victory’.

Seven carriages have been painted, each by a different artist, to represent various occupied regions of Ukraine. They are dedicated to Crimea, Mykolaiv, Kherson, Zaporizhzhia, Donetsk, Luhansk, all in the west of Ukraine, and Kharkiv, which although is not occupied, has been heavily shelled.

Each carriage has been painted in bold, vivid colours – starkly different from their standard blue colour.

The Donetsk carriage is dedicated to the soldiers who defended Mariupol and was painted by mural art collective Paint Hunters. Members of this group also designed the Kharkiv carriage.

The carriage for Kherson is decorated with a bold, multi-coloured doodle style design by graffiti artist Maxim Kilderov.

A message about the future of Ukraine

Since the beginning of the war, Ukrainian Railways (Ukrzaliznytsia) has evacuated an estimated 4 million people. Staff at the the company have stepped up to not only be conductors but rescuers, counsellors and nannies – an act that has made them into national heroes.

But the ‘Train to Victory’  has another purpose too, aside from celebrating the railway workers.

“This is one of the projects in collaboration with artists and railway workers with the aim of conveying a message that unites the whole country,” says Sergiy Leshchenko, one of President Zelenskyy’s advisors.

“This is a message to victory and a message of memory and struggle.

“For those cities that are occupied, for those people who were taken prisoner. For Azovstal, for Lysychansk, for Kherson. And at the same time, a message of victory in this war, which is inevitable.”

Where is the Train to Victory going?

For its inaugural journey, the train departed Kyiv on 23 August and headed to the city of Uzhgorod in the west, on the border with Slovakia.

After Uzhgorod, the train was destined for Kharkiv. Katya Taylor, a curator who coordinated the project, hopes that eventually the carriages will be split up to visit their representing regions when they are no longer occupied.

Each carriage has a QR code which links to a website where travellers can read more stories from the rail heroes.

Watch the video above to see more of the Train to Victory.

Everywhere in Europe that travel strikes are planned in December

Here’s why you should visit Rodrigues