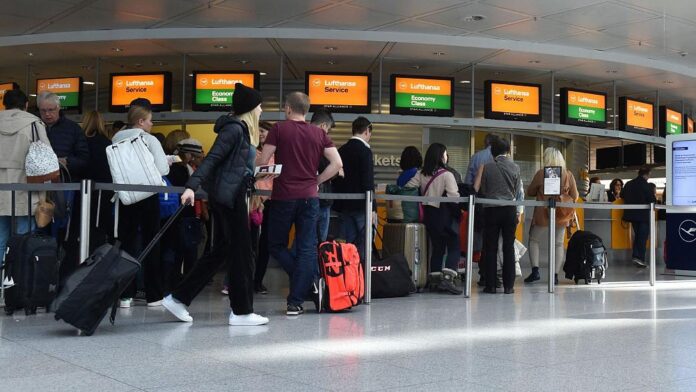 Airline giant Lufthansa is planning to cut more than 3,000 flights this summer due to staff COVID-19 shortages and strikes.

The news comes as a second wave of announcements is confirmed on Thursday, and currently relates to 2,200 flights – or 3 per cent of those scheduled.

The company already cut back 5 per cent of summer flights on Fridays and weekends, including 900 connections. It said this was due to “bottlenecks and [a] shortage of personnel, [meaning] the entire European aviation sector suffers”.

The staff shortages are occurring at “airports, ground services [and] aviation security,” explains the company in a press release sent to AFP. Lufthansa reported an increase in sick leave over the last few days.

“Strikes among air traffic controllers, the weather and above all an increase in COVID-19 infections” are cited as the cause.

As a result, the group is cutting 2,200 out of 80,000 flights to and from the hubs of Frankfurt and Munich, mainly domestic and intra-European routes.

The cancellations are no longer just on weekends – but also weekdays too.

The move has been deemed “inevitable” and means there must be more stability throughout the summer in order to avoid an “overload of ground processes during peak hours”, explains the group.

Since health restrictions have been lifted in many countries, notably in the UK, airlines have faced difficulties in meeting the surge in demand, mainly due to severe labour shortages.

In the UK, airports have been severely disrupted for weeks, with long queues and a series cancellations from Easyjet, Ryanair, British Airways, Tui or Wizz Air.

London’s Gatwick Airport announced last week that it would limit the number of daily flights in July and August, to avoid further chaos.

Morzine: How I lived without my phone for a week in the mountains